19 February – 1 March
Rose Stuart-Smith is a British artist who lives and works in London. Her practice is directly influenced by her natural environment. Drawing inspiration from these natural environments which have varied over the years from South America and Scotland, to periods in the Cornish coast, her abstract paintings evoke the vibrant energy of these wild places and mourn the loss of our rapidly disconnecting relationship to nature.
For this exhibition, Stuart-Smith fills the gallery with two series of paintings: large canvases are swathed in colour in contrast to small delicate watercolours. Six A4 paintings, conceived whilst on the Cornish Coast, hang contained within frames. Removed from the natural setting in which they were informed, the paintings bear witness to a unique environment, at a time of renewed focus on vital but increasingly vulnerable ecological settings.
Thirty watercolours from an ongoing series are hung chronologically, one painting leads to the next, creating an ethereal record of the passage of time. The paintings float in the center of the page, evoking the solemn shape of a gravestone or the everyday presence of a smartphone. Influenced by natural phenomena that are imagined or remembered, the colours, motifs and movement of her brushstrokes are delicate yet uncontrolled, revealing changing moods.
Large unstretched canvases are hung in the window. Unprimed, these canvases are laid out on the studio floor and flooded with diluted paint. Rather than seeking to control this process, the materials are unpredictably allowed to guide the outcome. A variety of materials including acrylic paint, ink, oil paint, wax, chalk and spirulina (blue green algae) mix, react against each other. As these materials coalesce, they soak, stain and pool into the canvas. With the reverse of these canvases exposed, seeped materials are visible, revealing the permeable membrane between natural and urban landscapes. These double sided paintings also gesture to the simultaneous and transformative nature of mythology.
The title of the exhibition, Selkies refers to creatures in Scottish Mythology capable of changing from seal to human by shedding their skins. Historically, folk tales depict Selkies coerced into a relationship with a human who has stolen her sealskin. Unable to return to the sea, their bodies deteriorate as their connection to their natural environment is lost. 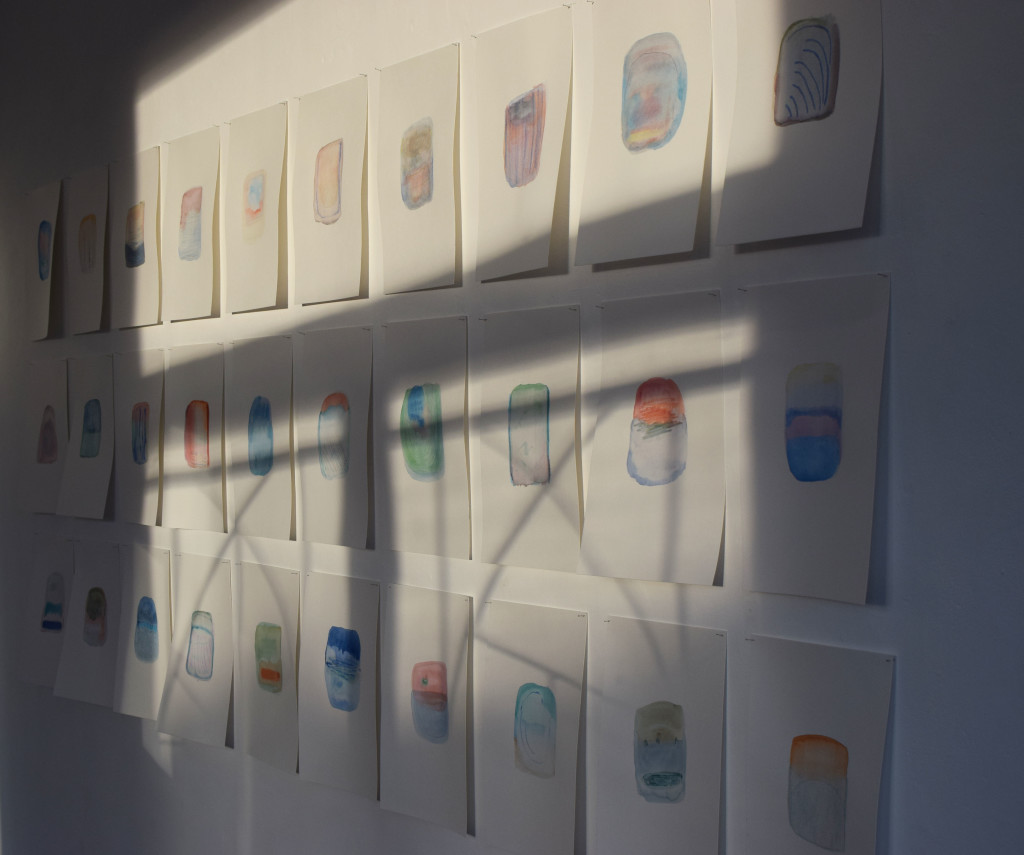